I enjoy the rabbits that run loose on the property each and every day. When we have a new batch of bunnies appear and they are so small they could fit in the palm of your hand I spend most of my day watching out the windows looking at the new bunnies. We recently had two new batches of bunnies arrive and one batch was very unique in color and markings. I was excited because before this batch was born they all were either black or white in color. This batch had some Tan/Grey with white splashes on them which was so cute. I only saw them for a few days and one by one they disappeared which told me we have a predator lurking around some where. I looked for tracks in the snow but didn't find any. Well about a week later I'm pulling out of the driveway and sitting high on a limb at the end of our driveway was a huge owl. It was as white as the snow. It was very beautiful, until I thought about what that owl was up to. I tried to get a picture of it but it was so far up in the tree and so dark out I just couldn't get a picture. Then just two days later I spotted another owl but this one wasn't so pretty and it was white with speckled brown through it. This time I did get a picture but not a very good one. 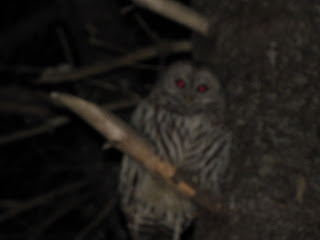 Actually I think it's rather spooky looking. This Snow Owl has been killing and eating my precious little bunnies. Out of two litters I have one little black bunny left. This was really upsetting because Easter is so close and we were hoping to have bunnies in time for the holiday for the kids.  I feed our feathered friends so I like birds but I just don't like birds eating my cute bunnies.
Posted by Rhonda Martin at 10:02 AM No comments:

Buzzing Down The Snowmobile Trail

We have Bunnies that run around on our property doing pretty much as they please.  They are so funny and entertaining I often find myself laughing out loud. Today was one of those days.   I guess they didn't want to hang out in the barn even though it was a windy chilly day so instead they thought they would go buzzing on down the bunny I mean snowmobile trail. 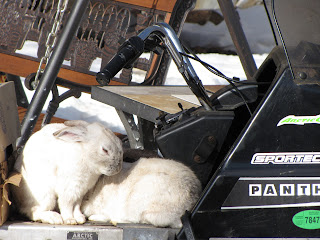 They even took turns and changed drivers. They are really good at sharing lol lol 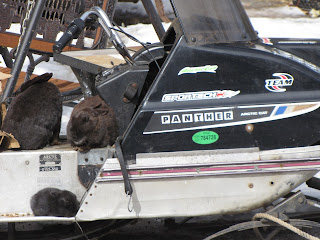 Even the baby went for a ride,,,,see him on the foot skid. I guess he was hitching a ride at the last minute. 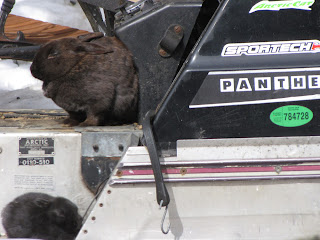 Some even like to ride backwards. At one point there was 9 rabbits ,,,yes 9 of them on the sled all at once. At that point I was laughing so hard I couldn't see to take pictures. Then I spotted "Socks" swinging on our lawn swing.  That was enough excitement for me for one day.  That was my funny for the day what was yours?
Posted by Rhonda Martin at 5:31 PM No comments: 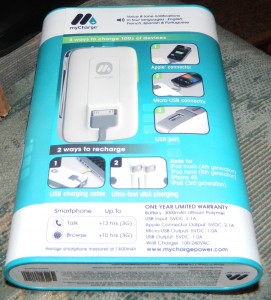 Have you ever been in the middle of something important and your IPad or Phone went dead!?!  I think we all have gone through that more than once. Or how about lost your power unexpectedly?  Sure you have. It happens in my home all the time because we live in the middle of nowhere on a mountain where the wind blows. We are lucky because usually the outages are less than 24 hours but not always.
Why am I telling you all this ? Because I just learned about a great product called myCharge Summit 3000 from reading a review at SaraLee's Deals Steals & Giveaways. This little tech bugger can charge all kind of our important gadgets. It carries 13+ hours of charge. During storm Sandy just think if only one person out of every ten had access to power. It would of been a big difference in a lot of peoples lives. Remember the person who put up a sign that said they had power and graciously ran cords outside and said "feel free to plug in" (hat off to that person for paying it forward). I would use the myCharge Summit 3000 all the time and wouldn't have to go without power for my iPad or Phone ever again :)  Cool huh ! The best part of this post is you can click on over to SaraLee's Deals Steals & Giveaways and enter to win one. Yup just click on any hyper-link in this post. Good Luck ~!  Oh and if you win I can already tell ya I'm jealous :)
Posted by Rhonda Martin at 7:19 AM No comments: SaraLee's Deals Steals & Giveaways has done it again. She is having another review and giveaway that you don't want to miss. I know you wouldn't think a girl would get so excited about a tool but if your building your own house you would.
As I think back over the past three years we have accomplished a lot but some days I feel like this house is never going to be completely finished. There is still so much to do it's hard to figure out what we want to tackle next. Of course money is always a factor in our decision of how big a job we want to tackle.With that being said we chose a smaller job right now. We had make shift stairs to get buy while working on other projects and now it's time to put in a nice permanent set. The ones we have now are just 2x6 ruff cut treads screwed in place. When he put the new ones in they will be the standard 2x10 stock treads. I know I'm probably boring you to death right, so let's get on to what you really want to know. Ok, what this post is really about is a great giveaway for a great tool. It's a Ryobi One + 18 Volt Drill~! Yeah~!  I am so excited about this review and giveaway because this would make putting those stairs in a wiz to do. If you would like to know more about it your going to have to check out the complete review at SaraLee's Deals Steals & Giveaway and while your there you can enter to win. Don't forget to check out some of her other reviews as well. She has a lot going on and several giveaways too. Just click on the hyper link and it will take you to her review and giveaway.
Good Luck~!
Posted by Rhonda Martin at 5:32 PM No comments: 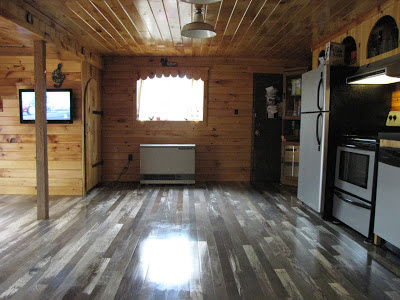 We decided to put wood floors down in the Kitchen/Dining room area and I really like the look. I picked out a varied Lt.Grey to Jet Black color which went really good with the appliances. I had no idea that you had to put several coats of polish to protect it. We decided to use Minwax Reviver high gloss. To get the look and protection it really needed the first time we had to do three coats but when it was done I just loved it. What do you think? Do you have wood floors? Are they hard to maintain? How often do you use reviver on your wood floors?
Posted by Rhonda Martin at 4:35 PM No comments: 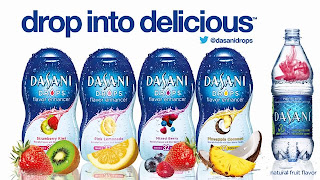 I have a confession to make, I hardly ever drink water. Why? I guess I have this weird way of thinking. Why pay for water when for the same price I could buy a soda. Not a good thing because water is good for us and is important to keep us hydrated. Today I read a great way for me to switch over to water and justify the cost and enjoy flavor at the same time. It was a review by mommy GAGA about Dasani Drops Water Flavors. I liked that it came in a small bottle so I can slip it in my purse and take it on the go. It will be a great way to add a little bit of flavor or maybe a lotta bit of flavor to my bottled water when I'm out and about. Another important part of being healthy is exercise and being fit and what better way than to win a bike. Yup that's right win a bike. After reading mommy GAGA's review you might want to enter her Dasani Drop Water Flavors Win A Bike Giveaway. How cool is that :)  This is a win win , learn about a great product and enter to win a bike. Check it out. Just click here.
Posted by Rhonda Martin at 7:12 AM No comments: 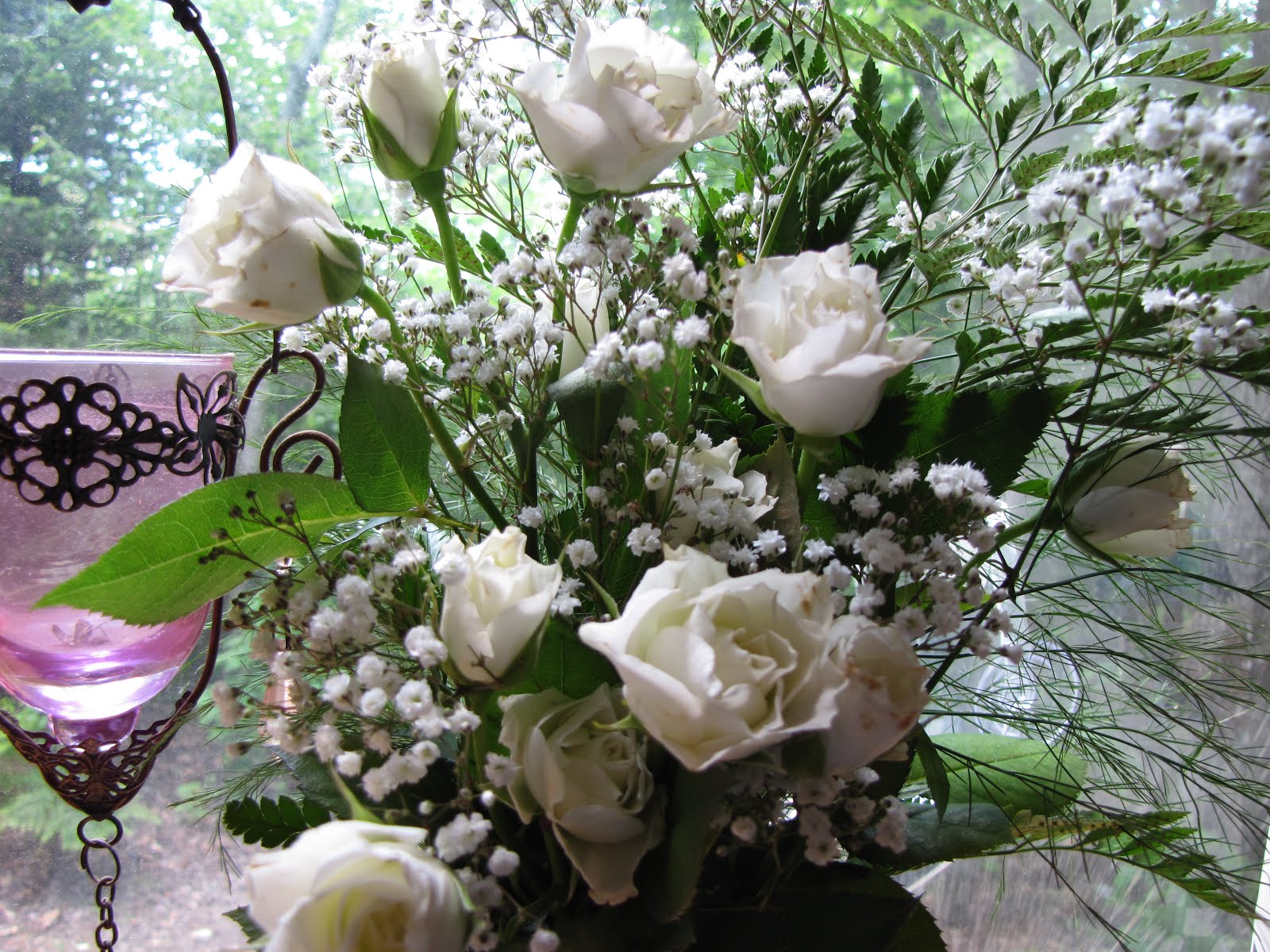 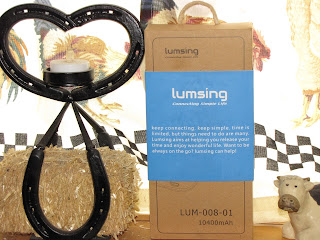